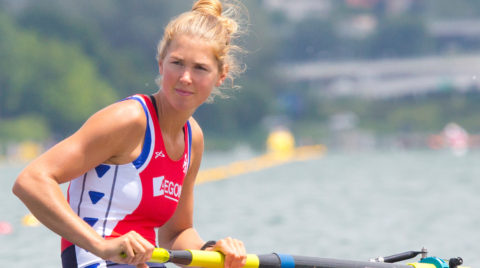 Plant based and Athlete

I visited Janneke van der Meulen in her home in Amsterdam. She is a vegan health expert and gives talks for several companies in the Netherlands on the topic of nutrition and work performance. She is the author of 2 books: Super Quick Recovery (2014) and Eat Win-Win (2017). As a hobby she is currently training for the Olympic Games in 2020.

The first questions I asked Janneke was how she came about becoming a vegan and how she combines this with her athletic performance.

Janneke: “One of my first inspirations was during primary school when my teacher explained to me how bizarre it is, we are eating pigs, cows and lamb but not our own dogs. This resonated right away with me and when I came home I told my parents I don’t want to eat meat anymore. My parents were sceptical and told me that there are important building blocks in meat we need to obtain to become strong. In small amounts I continued to eat meat”

When I was 15 years old though I started to have some physical complaints such as extreme fatigue and bad skin. After every meal I was wiped. Luckily the internet was there and I found articles stating that meat was actually very bad for our health. Even small amounts could already increase your risk on any of the first world diseases such as heart disease; type 2 diabetes; cancer and obesity. I was furious as for 10 years I thought I was healthy by eating meat. That was definitely a turning point and I only started eating plant based foods.

As an athlete people tell me daily that I need adequate amounts of protein and iron. I am not disregarding this as the demands are indeed higher but I believe there are other ways to obtain that. It resulted in a lot of research looking at what other plant based possibilities there are for people who are training at this intensity yet still are strong and healthy to reach their athletic goals. I quickly realized that eating is not only a physical need but is much more placed in the context of our emotions and social setting.

Stay tuned for question 2 in the series about supplementation.

Essentials in Supplementation
Scroll to top